The Ocelots (Formerly), The Blaze Rods

Maya is a character in Minecraft: Story Mode, appearing as a minor antagonist in "The Order of the Stone" and one of the two secondary antagonists in "Order Up!". She is a member of The Ocelots, and later the The Blaze Rods. She is currently under arrest by the Sky City Guards. She is voiced by G.K. Bowes.

Maya wears a leather Ocelots jacket in the earlier episodes, but in episode five, there are two crossed blaze rods on it instead. She wears a blue vest with a red shirt labeled with the letter "E". She has light blue eyes and brown hair.

Maya seems to be a young woman who is very selfish and arrogant, like most of the other members of The Blaze Rods. She is extremely loyal to Aiden.

"Boom! Egg!"
—Maya to Petra before she throws a spawn egg at her. src

"Hey, you, get a load of this!"
—Maya to the Wither Storm. (Determinant) src

"Order of the losers!"
—Maya to Jesse's Gang outside the Temple of the Old Builders. src

Maya with Aiden and Gill.

Maya with the Ocelots

Maya and the Blaze Rods. 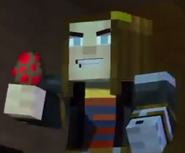 Maya throwing spawn eggs.
Add a photo to this gallery
Retrieved from "https://minecraftstorymode.fandom.com/wiki/Maya?oldid=182529"
Community content is available under CC-BY-SA unless otherwise noted.