Killed by the Witherstorm. (Determinant)

Griefer of The Order of the Stone

"The Order of the Stone" (Flashback)
"Assembly Required"

Above and Beyond (Mentioned, Determinant).

Magnus the Rogue, more commonly referred to as Magnus, is a member of The Order of the Stone and a major character in Minecraft: Story Mode. He is voiced by Corey Feldman. He first appeared in "Assembly Required".

Magnus has a completely bald head with a black bandana. He has green armor with a belt half way up his body and four yellow buttons on his chest. He has brown gloves and yellow shoes. Prior to episode two, he wore a completely transparent helmet, currently in possession of Axel. His armor is presumably made of emerald. It is also possible that he used to have brown hair, as his eyebrows are brown.

Magnus is shown to be very stubborn, as well as egotistical. Before losing to Jesse, Magnus is nicknamed the best griefer to ever live. He is shown to become pretty much insane if you go to Boom Town, as he can be seen with fire in his eyes and trying his hardest to kill Jesse. However, that could have him just being a very good actor, as he had to make things look "legit". He has a tendency to get cocky and boast. However, he also offered to give up his armor for Jesse, though he may have just done it to gain favor with the group.

"What say you, noob? I am King, and those who challenge me will be annihilated!"
—Magnus to Jesse. (Determinant) src

Magnus and Jesse's relationship depends on the choices the player makes; if he/she takes Magnus' side in important situations, they will be on good terms, otherwise, Magnus will be very suspecting of Jesse.

"I'm hanging out with Magnus! I am doing awesome!"
—Axel to Jesse. (Determinant) src

Axel and Magnus are similar in many ways and share a love of griefing. Magnus appreciates this; however, he thinks Axel to sometimes be annoying and a bit of a dork.

"Wow. You finally found yourself a live one."
—Magnus upon seeing Olivia supporting Ellegaard. (Determinant) src

Magnus and Olivia do not interact much. However, in the debates between him and Ellegaard, Olivia always takes Ellegaard's side, which annoys him.

"Time to see how well you fly, pig!"
—Magnus about to launch Reuben in his TNT cannon. (Determinant) src

Magnus has been shown to be a somewhat unkind to Reuben, for he tried to launch him in The Death Bowl possible to injure him, but Axel catches him. However, if Magnus is alive in episode 4, he will be saddened by Reuben's death.

"You always were a tough cookie to keep down."
—Magnus to Gabriel. (Determinant) src

Magnus and Gabriel are both members of The Order of the Stone. They defeated The Ender Dragon together and are good friends.

"Oh hoo-ray. It's Ellie. And here I was just starting to enjoy myself!"
—Magnus unhappy to see Ellegaard. (Determinant) src

Magnus and Ellegaard are both members of The Order of the Stone. They defeated the Ender Dragon together. However, they do not get along. They frequently argue and strongly disagree, much to the annoyance of the other members of the group. However, after Ellegaard is killed (determinant) by The Wither Storm, Magnus begins to miss Ellegaard, while Ellegaard continues to insult him fondly if Magnus is killed, although she is still shown being genuinely sad about his death.

The list below shows the victims Magnus has killed:

When Jesse is going to use the Formidi-Bomb on the Wither Storm, Magnus and Ellegaard will offer their armor. If the player chooses to use Magnus' armor, he will be thrown by the Wither Storm into a tree and die due to him not having armor to protect himself.

"Stop eating my kingdom!"
—Magnus to the Wither Storm. src

"So, who are you then? And why did you bring the Queen of the Nerds with you?"
—Magnus to Jesse about Ellegaard. (Determinant) src

"Yeah, he's sticking up for me, it's because I'm really awesome and super cool."
—Magnus to Ellegaard about Axel. (Determinant) src

"Yeah, yeah, yeah. I've heard all about the 'F-Bomb' before."
—Magnus to Ellegaard about the Formidi-Bomb. src

"Soren claimed that dropping the 'F-Bomb' could destroy ANYTHING."
—Magnus to Axel. src

"I guess I could talk about that time I blew your bed up. Twelve times in a row. "
—Magnus to Gabriel. (Determinant) src

"It's up to you, Jesse. Real armor or nerd armor."
—Magnus to Jesse. src

"Hey, at least I finally got to be a real hero, right?"
—Magnus to Soren before dying. (Determinant) src

Magnus in the flashback in episode 1.

Magnus walking out of his room in the flashback in "The Order of the Stone".

Magnus with the Amulet.

Magnus with Axel, Jesse, and Reuben. 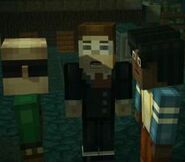 Magnus with the Death Bowl Announcer and Jesse.

Magnus with Reuben (Pig) at the Death Bowl.

Magnus looking at the Temple of The Order of the Stone. 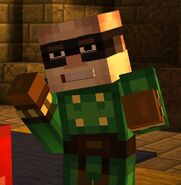 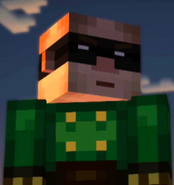 Magnus in the Temple. 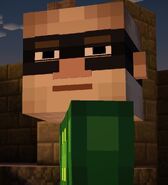 Magnus in the Old Order's Temple.

Magnus in the Old Order's Temple.

Magnus getting hit by the Witherstorm. (Determinant)

Magnus moments before succumbing to his injuries.

Magnus in the flashback when the Ender Dragon almost killed them.

Magnus in the fake story that Soren told Jesse of how the Old Order took down the Ender Dragon. 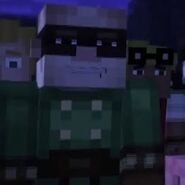