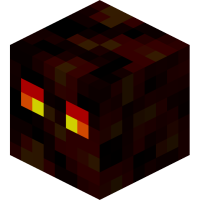 "Hero in Residence" (statue),
"Below the Bedrock"

Magma Cubes are hostile mobs and a variant of slimes that appear in Minecraft: Story Mode Season Two. They first appear as a mob head in "Hero in Residence" and appear physically in "Below the Bedrock". They spawn exclusively in the Nether, and like all types of slimes, they come in three size variations.

Retrieved from "https://minecraftstorymode.fandom.com/wiki/Magma_Cube?oldid=159183"
Community content is available under CC-BY-SA unless otherwise noted.