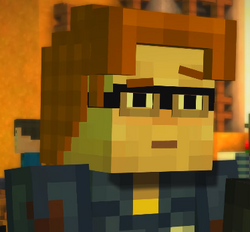 Mabel is a minor character in Minecraft: Story Mode and a resident of Redstonia. She appears determinately in "Assembly Required" and makes a cameo in "A Block and a Hard Place". She invented the "Cow-A-Pult" machine. She is voiced by Erin Yvette.

Mabel appears to be a red-haired woman. She wears a blue shirt and brown lowers which appear to be stained with redstone dust.

Mabel seems to be an avid Redstonist who is obsessed with cows. She, like most others in Redstonia, aspires to be Ellegaard's protégé.

" Welcome to Maaaabel's Mighty Cowapult! Make your cows soar through the air with a wide-eyed stare!"
—Mabel to Jesse. (Determinant) src

"Be amazed! Be astounded! Let your wonders be compounded!"
—Mabel to Jesse. (Determinant) src

"Deep down in all people, there lurks the overwhelming desire... to throw cows. Admit it!"
—Mabel to Jesse. (Determinant) src