"Oh, Lluna, my darling! You came home! You came back!"
—Stella talking to Lluna. src

Lluna is a main character in Minecraft: Story Mode - Season Two. She first appeared in "Hero in Residence".

Lluna has white fur and wears a purple and blue scarf. In Jailhouse Block, she wears a dark purple scarf and a hat. Lluna may also have a chest equipped later in the episode if Jesse decides to let Nurm stay as a replacement for Xara.

Lluna is a disobedient, spirited llama, as shown when she tried to escape from Champion City several times due to Stella's abuse. Lluna is a smart llama, as shown in "Jailhouse Block" when she tries to find a way to kill hostile mobs (determinant), and she seems to be able to understand speech, as shown in "Hero in Residence" when she frowns at Petra's comments on her as well as Jesse making a joke in Champion City (determinant).

Lluna is notably obsessed with treasure, as she is known as a "treasure-sniffing llama" and led to Jesse finding the Prismarine Gauntlet. She tried to bite Jesse's Prismarine Gauntlet twice in "Giant Consequences," the amulet once, and even Fred's compass once in "Below the Bedrock." She also sniffed out the buried "Golden Apple" armor in "Below the Bedrock" (determinant).

When first shown, Lluna was defiant to Jesse as she kicked him/her, spat on him/her, and attempted to run away. However, Lluna did not want to leave Jesse and his gang when she was being brought away by Rodrigo in Champion City and Stella in the Admin's Palace.

In "Giant Consequences," Jesse can call Lluna goofy, cute, or say that he/she is not a fan of her. Nonetheless, she will also feel sad if Jesse decides to make her stay in Xara's prison cell (determinant). If Jesse took Lluna with him/her, Lluna's relationship with Jesse drastically improves, as she is shown to care for Jesse and wants to stick with him/her. Jesse can eventually call Lluna his/her pet in "Below the Bedrock".

Lluna sees Petra similarly to Jesse, as she kicked her and felt sad when being brought away by Rodrigo in Champion City and Stella in Romeo's Palace.

Stella is the former/current (determinant) owner of Lluna; however, Lluna does not like Stella at the beginning because of her treatment, as she had been trying to escape from her. She is seemingly not comfortable with Stella's orders, being brought away by Rodrigo, being hit, and being pulled by Stella. In "Above and Beyond," however, when Stella joins Jesse's Gang, she does change her behavior towards Lluna for the better, even asking Jesse if they would like to take of her. When Jesse decides not to come between the two, Stella apologizes to Lluna for how she treated her and hopes that Lluna will let her prove that she could be better if Lluna stays,which makes their relationship better (determinant).

Although never showing gratitude back to Nurm determinately staying in Xara's cell, Nurm does show to care for Lluna as much as his other friends, evident by him volunteering to stay in Xara's cell and when finding a carpet for Lluna as a gift for when they see each other again (if Lluna is left behind). Lluna, however, does not seem to mind staying behind and leaving Nurm worried about her. When Lluna comes back, Nurm gives her a hug.

Though not interacting too much, Lukas and Lluna seem to not mind each other's company, with Lukas calling her a "smart llama."

Same with Lukas, Jack and Lluna do not seem to mind each other's company. When Stella was making Lluna try to find the Clock, Jack tried to defend Lluna. However, if Jesse chose to leave Nurm behind in Xara's cell, Jack grows hostile toward Lluna and often blames her, but Lluna does not seem to care. Eventually, they start to appreciate each other.

If Jesse chooses to leave Lluna at the cell in Jailhouse Block, than in Above and Beyond, Ivor is seen with Lluna, claiming to have helped her escape. Ivor seems quite impressed with Lluna’s climbing abilities, stating that she's quite the escape artist and that he may consider making her his apprentice. However, if Jesse leaves Nurm in Jailhouse Block, than Ivor never really gets to know Lluna that well.

Jesse, Petra, and Lluna saw the Prismarine Gauntlet in the cave.

Lluna with Jesse and Petra.

Lluna sad by being taken away by Rodrigo. 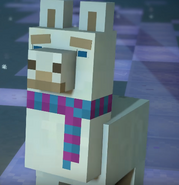 Lluna with the rest of the gang (except for Lukas) in Giant Consequences.

Lluna jumping down on her own. 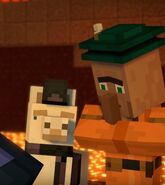 Lluna gets shocked at Xara for killing the Warden. (Determinant)

Lluna being surrounded by monsters. (Determinant)

Lluna appeared in the other side of the magma arena. (Determinant)

Lluna in "Above and Beyond" still wearing an associate outfit.

Lluna happily jumping up and down.

Lluna being pet by Jesse.

Lluna in "Above And Beyond"

Lluna leaves with Stella in Above and Beyond. (Determinant)

Lluna running with Jesse and Petra. (Determinant)
Add a photo to this gallery

Retrieved from "https://minecraftstorymode.fandom.com/wiki/Lluna?oldid=191456"
Community content is available under CC-BY-SA unless otherwise noted.