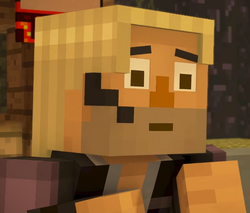 Lawrence is a minor character in Minecraft: Story Mode - Season Two and former guard for Romeo. He first appeared in "Above and Beyond" and was voiced by Mark Barbolak[1].

Lawrence has blonde hair, black eyebrows, brown eyes, some facial hair, has a Caucasian skin color, has a microphone, and has a purple associate outfit.

Not much is known of Lawrence's personality, though when he thought Jesse was Romeo in disguise, he was nervous, and ran away.

It is unknown why Lawrence was promoted to associate by Romeo, but Lawrence is terrified of Romeo's presence. It is also unknown what Romeo thinks and how he feels of Lawrence.

"I mean, you can totally call me Stella, though!"
—Lawrence trying to please Jesse, who he thinks is Romeo. (Determinant) src

Retrieved from "https://minecraftstorymode.fandom.com/wiki/Lawrence?oldid=164529"
Community content is available under CC-BY-SA unless otherwise noted.