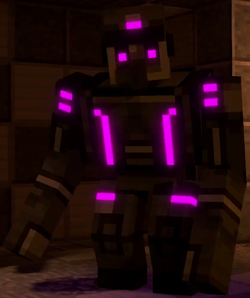 Guard of the Sunshine Institute

Large Henry is a character in Minecraft: Story Mode Season 2 and a prison golem who first appeared in the episode, "Jailhouse Block".

Large Henry appears to be a black iron golem with purple-neon lights and a hat, similar to the other golem guards in the Sunshine Institute.

Large Henry acts as The Warden's personal guard, taking his orders and following each and every one of them. Large Henry is extremely obedient, and appears to have no desire to do anything other than what is instructed.