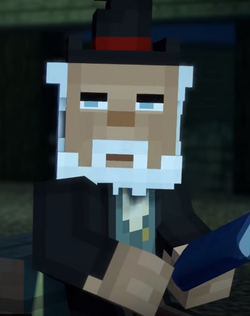 Kent is a character in Minecraft: Story Mode Season Two. He first appeared in "Below the Bedrock" and is either the former champion of the Faithful Friend of Fred trivia contest or the defending champion of said title. He is voiced by Mark Barbolak.

Kent is shown to be competitive, but kind, as shown when he helps Jesse hold off the Giant Enderman to fix the portal to the Overworld.

Add a photo to this gallery
Retrieved from "https://minecraftstorymode.fandom.com/wiki/Kent?oldid=182181"
Community content is available under CC-BY-SA unless otherwise noted.