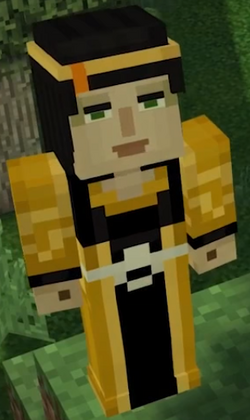 Isa about to climb back up to Sky City with Jesse.

"After so long being the Founder and the Eversource, now we can just be 'Isa' and her best friend... Benedict."
—Isa to Jesse's Gang. src

Isa, also known as The Founder, is a supportive character in Minecraft: Story Mode. She is the founder and leader of Sky City. She is voiced by Melissa Hutchinson and first appeared in "Order Up!".

Isa appears to be a mature, dominant woman with black hair who wears a long golden gown and a golden crown. She is the strict ruler of Sky City and is responsible for her citizens and what they craft, build, and smelt.

Isa is portrayed to be a dominant and controlling character who likes to be in charge. At first, she seems negative, however, as the story progresses, she becomes supportive of Jesse and his/her gang. She is also a great martial artist, duelist, and builder. Jesse can even choose to say to Milo that Isa's heart is in the right place.

"And when something falls... it is gone forever."
—Isa to Jesse in Sky City. (Determinant) src

"Cute."
—Isa, (sarcastically) to Jesse, after being called a control freak. (Determinant) src

"I can't decide whether I want our death to be painless for my sake, or excruciating for yours!"
—Isa to Jesse. src

"This has been down here the whole time..."
—Isa discovering ground below Sky City. src

"People of Sky City, a crime has been committed."
—Isa to citizens of Sky City. src

"I believe so, and when I get up there I'm gonna tear those Blaze Rods limb from limb."
—Isa to Jesse, about to head back up to Sky City. src

Isa on the surface beneath Sky City.

Isa and Jesse in Sky City.

Isa talking to the citizens of Sky City.

Isa and Jesse after landing in a lake. 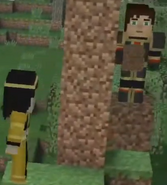 Jesse and Isa building their way up back to Sky City.

Isa about to talk to the Sky City citizens.

Isa the Founder in the Season 2 opening backstory 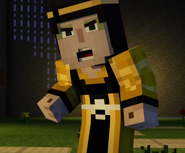