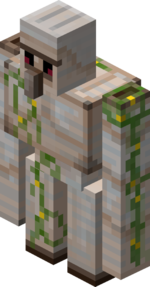 An Iron Golem in Minecraft

"The Order of the Stone",
"The Last Place You Look",
"Order Up!" (determinant)

An Iron Golem is a mob that appears in Minecraft: Story Mode. They are large, strong passive/neutral utility mobs that protect their creator and attack hostile mobs. They first appear in "​The Order of the Stone", when Ivor orders one to attack Jesse.

Iron golems are tall creatures, made completely out of iron, with vines hanging on their bodies.

Iron golems are fiercely loyal to their creators, and obey their commands. They also attack any hostile mobs they see (except wolves and creepers), making them very useful guards. They also attack players if they hit them. However, they are not very diligent, as they can be easily distracted. For example, if Jesse decides to rescue Lukas from Ivor's basement in episode one, the golem is distracted by Reuben's oinking.

An Iron Golem made by Ivor.

The speech by Isa after landing on the ground below Sky City. Jesse's Iron Golem can be seen behind the crowd. (Determinant)

An Iron Golem being spawned.

An Iron Golem attacking a Zombie.