The Icy Golem is a boss mob that can be fought optionally in "Giant Consequences". Its appearance is similar to an Iron Golem, but with white skin, three buttons across its torso, and a pumpkin over its head. Upon being unmasked, its face is shown to be stuck in a dazed expression, and crafted with minimal detail.

If Jesse goes with Lukas and Radar, Jesse kills the Icy Golem by taking off its legs to get to its head. Jesse pulls it off its pumpkin mask, and it is killed.

If Jesse goes with Petra, Jack, and "Vos," Lukas was the one to kill it, evident by him escaping the shooting gallery room. 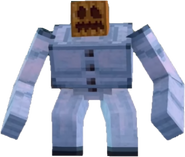 One of the Icy Golems (determinant) 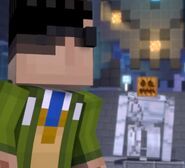 Radar looking at one of the smaller version of the Icy Golem (determinant).

Jesse jumped after Lukas and Radar.

Jesse fighting the larger Icy Golem in the Icy Palace of Dispair (determinant).

Jesse was being saved by.