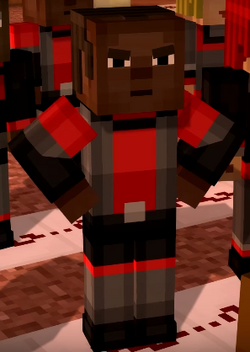 "Wow! Well, thank you. We owe you everything."
—Harry to Jesse's Gang after being rescued. (Determinant) src

Harry is a minor character who is in Minecraft: Story Mode. He first appeared in "Access Denied" and a resident of Crown Mesa.

Harry has a dark skin tone, wears red, gray, and black clothes, and has brown hair.

He appears nice if Jesse defends Harper but appears rude if Jesse does not. He does have bits of respect for Jesse and the others, as they saved him. Other than that, his personality is not much explored. Determinately, he can be pleased or upset with Harper, since she made PAMA.

"So, what, we're just supposed to forgive her now?"
—Harry talking about Harper. (Determinant) src

The townspeople of Crown Mesa waving "good-bye" to Jesse's gang and Harper. (Determinant)

Harry meeting The New Order of the Stone.