"Below the Bedrock" (Mentioned)

"I swear I made PAMA with good intentions. It was designed to automate things. Make everything more efficient. Use monsters to help with farming or mining."
—Harper explaining why she made PAMA.

Harper is a character in Minecraft: Story Mode, appearing in "Access Denied" and "A Journey's End?". She is voiced by Yvette Nicole Brown. She is the creator of PAMA.

Harper is an inventor who wears a yellow jumpsuit outfit with a brown hoodie, black goggles, green eyeshadow, black gloves and black shoes. She also has white hair, black eyes, gray eyebrows, and dark skin. Also revealed by a painting, Harper used to have black hair and black eyebrows around the time she created PAMA.

Harper is portrayed to be an intelligent individual with a brave and resilient personality. At first, she appears apprehensive and unfriendly. However, as the story progresses, she proves herself to be both loyal and caring towards Jesse's Gang. She is also a great inventor and is responsible for inventing PAMA and the Mind-Control Headset, but appears to suffer from loneliness as a result of her isolation. As a result, she created several robotic greeters named after Crown Mesa's citizens to help her cope with this.

She programmed the robotic greeters so they can tell her to forgive herself, showing that she blames herself for all the trouble PAMA has caused. While apprehensive about befriending others, she is also very loyal to those she does befriend, such as Jesse's gang, to the point in which she is willing to stand up to Hadrian at one point. Harper also has a habit of eavesdropping on other people's conversations.

"Nice work, new guys! But I'd get outta there fast if I were you - PAMA's a quicker learner than you think!"
—Harper to Jesse and Ivor. src

"We need to get to my secret lab."
—Harper to Jesse's gang. src

"Maybe it's not getting through to you, but PAMA is dangerous!"
—Harper to Jesse. src

"Careful with all that sputtering. You'll swallow your beard."
—Harper to Ivor. (Determinant) src

"Make sure you don't drool on my floor now."
—Harper to Ivor. src

"You are a strange, strange man Ivor. But you know something? You're OK."
—Harper to Ivor. (Determinant) src

"Before you go in there, I have one piece of advice: don't die!"
—Harper to Jesse's Gang. src

"Now you two take care of each other, all right?"
—Harper to Jesse and Ivor. (Determinant) src

"I appreciate the vote of confidence, Jesse. Sorry, I couldn't resist a good eavesdrop. I promise I'm trying to help, Lukas."
—Harper to Jesse and Lukas. (Determinant) src 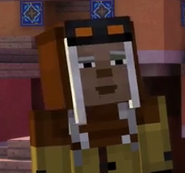 Harper looking at Jesse and Ivor.

Jesse and Ivor running with Harper.

Harper with Jesse and Ivor.

Harper walking with Ivor and Jesse to her lab. 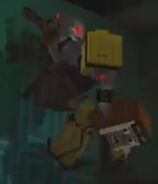 Harper being carried away by mind controlled Lukas who's riding on a spider. (Determinant) 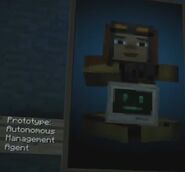 Harper, when she first created PAMA.

Harper standing next to Ivor.

Jesse about to ignite the portal.

Harper waiting for Jesse to put the Redstone Heart in.

The moment after Harper opened the secret slot for Jesse.

Harper in the Old Builders world talking to Lukas.

Harper pushing the gang to The Games.

Harper with Jesse and Ivor.

Harper, Jesse, and Ivor walking to the Competitors' Village, (Determinant).

Harper talking to Jesse in the respawn zone for The Games. 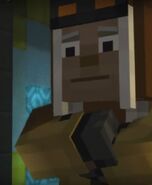 Harper in the Portal Network.