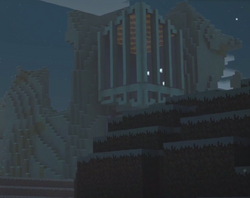 A view of Hadrian's Palace at night.

In the Old Builder's World

"This is incredible! Such amazing use of scale and angles!"
—Jesse commenting on Hadrian's office. (Determinant) src

Hadrian's Palace is a location in Minecraft: Story Mode that appears in "A Journey's End?".

Hadrian's palace is located on a mountain in a snow biome, within the Old Builder's world. It overlooks the Competitors' Village and is also located relatively close to The Games arena.

The interior of Hadrian's palace consists of a quartz floor with obsidian and purple stained glass patterns surrounded by a border of gold blocks. The walls consist of quartz pillars and chiseled quartz. Obsidian pillars which reach up to the high ceiling made completely out of gold, as seen from the outside. The front of the room overlooking the Competitors' Village contains a series of windows made out of white stained glass which are separated by more obsidian pillars. There are several sea lanterns used for lighting. Many bookcases are also present, including some set into the walls.

Slab bringing Jesse to Hadrian's office inside the palace.

Jesse looking at the Competitors' Village from Hadrian's Palace.

Jesse and Hadrian talking in front of Tim's Armor.

Hadrian talking to Jesse looking at Tim's Armor, which is on display in the palace.