"Guests" in the Mush Room.

"You see, here at the Sunshine Institute there are two types of guests: people who made The Admin extra-angry, such as yourself and your punch-happy friend down there... Aaaand there are people who The Admin sends to make sure that the first group will, ah, be well-behaved."
—The Warden to Jesse. src

"Guests" (Inmates) are characters in Minecraft: Story Mode Season 2. They have been imprisoned in the Sunshine Institute by Romeo if they have done something to him, or annoyed him in any way.

"Guests" wear orange prisoner suits and are forced to follow strict rules which limit their food source, while associates are tasked to keep the "guests" in line. 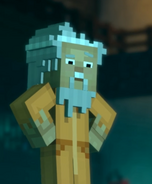 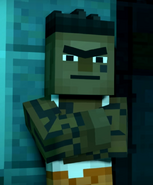 A "guest," in the zombie mines.

Another "guest" with a hook hand.

A "guest" comforting another. (Determinant)

Another "guest" with tattoos.

The Warden in his "guest" clothes. 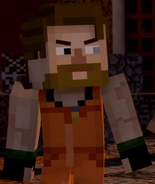 Jack determinately in his "guest" clothing without an eye patch. 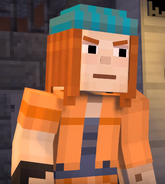 Petra determinately in her "guest" clothing. 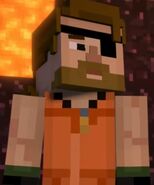 Jack determinately with an eye patch and "guest" clothing.

Nurm in his "guest" clothing.

Xara in her "guest" clothing.

Radar in his "Guest" outfit