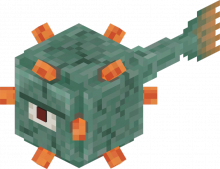 Guardians are capable of firing a beam from their eye; this beam is deadly to both squids and humans.

Jesse underwater with a Guardian in Season 2.