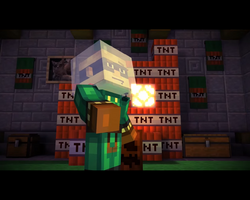 Magnus the Rogue - an expert griefer.

Griefers are a class in Minecraft: Story Mode who excel at pyrotechnics and demolition.

Griefers are extremely trained and skilled in the art of griefing, and creatively utilize TNT through building traps and TNT Cannons. They enjoy blowing things up with TNT and they tend to have very destructive and mischievous personalities.

Some griefers surrounding Jesse, Axel, and Reuben in Boom Town. Nohr is seen talking to them.

Jesse, Axel, and Reuben pushing past some griefers in Boom Town. 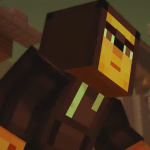 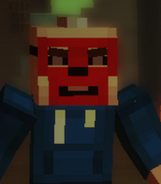 A Boom Town griefer with a red mask.

A group of masked griefers.

Jesse falling on a griefer.

Jesse talking to Nohr, a griefer. Another one seen be seen sneaking up behind.

A griefer with grey hair and a red mask. 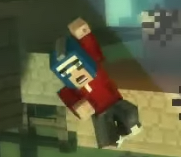