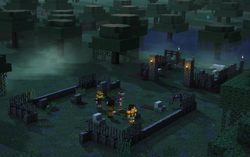 Jesse's Gang at the Graveyard

"Besides, unless the next portal is disguised as a tombstone, I'm not seeing it anywhere near here!"
—Ivor at the Graveyard. src

The Graveyard is a location in Minecraft: Story Mode that first appeared in "A Portal to Mystery".

The Graveyard was the spawn-point of the unknown world where Jesse's gang end up in "A Portal to Mystery". It appears to be in a swamp biome. The area is also infested with zombies spawned underneath The Mansion.

The Graveyard was a small fenced off area consisting mainly of cobblestone and iron bars. It could be entered through a large cobblestone gateway. It contained several graves along with an invitation from the host.

The path connecting the Graveyard to The Mansion.

The Invitation inside the Graveyard.

The invitation area inside the graveyard.

A different part of the graveyard.

The entrance to the invitation area.

Jesse reading the invitation at the Graveyard.
Add a photo to this gallery

Retrieved from "https://minecraftstorymode.fandom.com/wiki/Graveyard?oldid=163927"
Community content is available under CC-BY-SA unless otherwise noted.