Facemeat and Clutch asking Slab what they should do.

Jesse: "You are all such strong, amazing fighters - you could fight the Old Builders! Defeat them!"
Clutch: "No way. I am very strong... but not strong enough for that."
Facemeat: "Yup. That is some straight crazy talk."
—Jesse trying to persuade the Gladiators. (Determinant). src

The Gladiators are a group of warriors serving the Old Builders to beat the Competitors in The Games. The first appear in "A Journey's End?".

There are seven current gladiators and one former gladiator seen in Episode 8:

Gladiators are very strong and skilled fighters. Their job is to keep the games unbeatable. They knock competitors out by throwing TNT, firing flame arrows, or melee combats using enchanted diamond weapons.

At the time off of game matches, gladiators guard in Competitors' Village. They also prevent defeated competitors from escaping the quartz mines.

A Gladiator with a pink mohawk. (Either "Headpunch" or "Meatface.")

Facemeat, a gladiator at The Games. 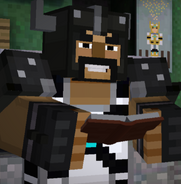 Slab the Immovable, a gladiator.