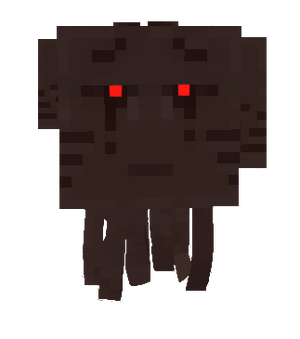 "A three-headed ghast?! Yikes! Why would The Admin create that?!"
—Jesse astounded to see the Giant Ghast. src

The Giant Ghast is an antagonist and boss mob that appears in "Jailhouse Block". It is an exclusive variant of the ghast, created by Romeo.

The Giant Ghast is, as the name implies, a giant version of a ghast. It has three faces: the main one at the front and smaller, secondary ones on its right and left side. It is dark gray in color, in contrast to the normal white, and has a vulnerable red spot on top of its head.