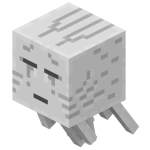 A Ghast in Minecraft.

"The Order of the Stone",
"Assembly Required",
"Order Up!",
"Jailhouse Block"

"Why does it hate us so much?!"
—Axel to Jesse. (Determinant) src

Ghasts are hostile mobs in Minecraft: Story Mode found in The Nether. They can drop gunpowder and ghast tears when killed.

A Ghast and a Zombie Pigman in the Nether.

Jesse and Reuben flying past a Ghast inside a Minecart.

Ghast with its mouth open.

An exclusive Ghast that appears in Jailhouse Block.