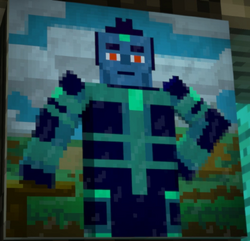 Fred's Portrait in "Below the Bedrock".

"Above and Beyond"
(mentioned and hologram)

"There's something else you should know. There was a third Admin, named Fred."
—Xara to Jesse about Fred. src

Fred is a deceased character in Minecraft: Story Mode, Season Two. He was also an Admin, as mentioned by Xara, and knew the key to defeating Romeo, the Golden Gauntlet. He is voiced by Fred Tatasciore.

Fred had a lapis-blue skin color, red pupils, turquoise and navy blue clothes, and dark blue hair. He had a bigger build of two and a half blocks tall, unlike the other admins, which have the normal build.

"Fred's true spirit didn't lie with his exterior, Kent, but what was underneath."
—Binta to Kent about Fred. src

Fred's hologram record and journal show that he cared deeply about his friends. Unlike Xara, Fred believed that Romeo could be redeemed. Despite knowing he could be killed at any time, Fred had hope for Romeo. He also had no intentions to conquer other worlds, unlike Romeo. He was also mentioned to be kindhearted.

"Fred was the best of us, cut down. I can't let it stand."
—Xara to Jesse about Fred.

Xara and Fred were very good friends until Fred's death, and Xara seemed sad when Fred died and afterward. Other than that, not much else is known about their relationship.

Even though Romeo was the one who killed Fred, Fred believed that Romeo could be redeemed. Fred also came to Romeo with the best of intentions, as mentioned by Xara.

In an unknown argument between Romeo, Fred, and Xara, Romeo challenged the two Admins and killed Fred in the process. Xara reveals that Fred was killed in front of her in a room in The Underneath, and that it was "slow."

"Then good luck, Xara. I think you might need it."
—Fred to Xara (despite Jesse being the receiver) in his hologram record, after Jesse or Jack answers. (Determinant) src

Fred's appearance as a hologram.

Fred inserting the Gauntlet inside the pedestal.

Hologram recording of Fred in the Terminal Space.

Fred "answering" Jesse after talking about his gauntlet. (Determinant)

Romeo appearing before Jesse gets the gauntlet.

Jesse obtaining the Golden Gauntlet.
Add a photo to this gallery

Retrieved from "https://minecraftstorymode.fandom.com/wiki/Fred?oldid=201325"
Community content is available under CC-BY-SA unless otherwise noted.