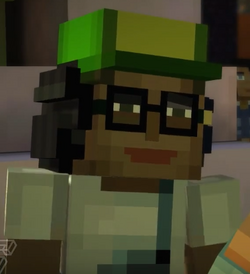 "Why waste time planting sugar canes when it could be planting itself?"
—Farmer Gloria to Jesse. src

Farmer Gloria is a minor character in Minecraft: Story Mode and a resident of Redstonia. She appeared as a determinant character in "Assembly Required" who invented the Auto-Farming Machine. She is voiced by Erin Yvette.