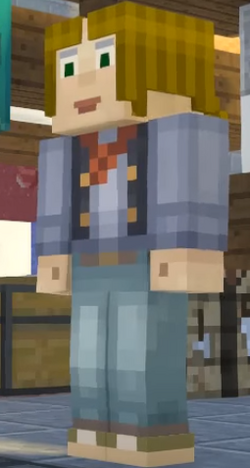 Fangirl is a minor character who is in Minecraft: Story Mode and first appeared in "Order Up!". She is a resident of Beacontown and is voiced by Katrina Carras.

Fangirl has greenish-brown hair, with gray eyebrows, green eyes, a blue shirt, and a red tie.

Fangirl seems exilted of Jesse and the gang's arrival in Episode 5, but other than that, her personality is unknown.

"Run! Tell everyone that our heroes have returned!"
—Fangirl telling a townsperson to tell everyone about Jesse and the gang's arrival back to Beacontown. src

"Welcome back!"
—Fangirl to Jesse. src

"Eeee! Jesse! Jesse! Gimme five!"
—- Fangirl when Jesse walks by her to the Mines