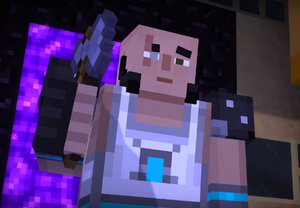 Facemeat is a character in Minecraft: Story Mode who appears in "A Journey's End?". He is voiced by John Sanders.

Facemeat is a Gladiator in the Games with a 2.5 block build. He wears white pants, black shoes and a white sleeveless shirt with a cyan colored center. He also has two black shoulder guards and black gloves with cyan colored ends. He also sports black side-burns, but no hair. His natural eye color appears to be brown, however, his right eye appears to be blind, giving it a white color. There is also a scar above his right eye which is supposedly linked with his partial blindness.

Facemeat doesn't appear to be very intelligent, as he talks in broken sentences and seems to be rather simple-minded, with him always saying "Facemeat" when he means himself. This can be shown by the fact that despite being the Gladiator guarding the portal to the quartz mines, which means that he's supposed to keep the miners in and the competitors out, he is easily swayed by Jesse's cute puppy eyes, and allows Jesse to have his/her friends back in exchange for a piece of Bread.

"Ooops. Did Facemeat drop something?"
—Facemeat to himself before dropping a piece of TNT. src

"Too many... perspectives..."
—Facemeat to himself. src

"Hey, no need to yell. Though Facemeat is impressed."
—Facemeat to Jesse when he/she asks impolitely. src

"Here comes the boom!"
—Facemeat while throwing a block of TNT during Lava Race.  src

"Bread, huh? It's not cake, but Facemeat is starving."
—Facemeat after Jesse gives him a loaf of bread. src

"It almost feels like Jesse is acting as a mirror... a vessel in which to see the emptiness of our own actions and the meaninglessness of being a pawn for others. "
—Facemeat to the other Gladiators. (Determinant) src

Jesse: "Oh, my gosh, do you really think so? That's terrible!"
Facemeat: "Oh, wow, I mean, yeah! Could you not tell?"
Jesse: "I hate you."
—Jesse and Facemeat in the Walls. (Determinant) src

Facemeat sitting in front of the portal to the quartz mine.

Facemeat holding a loaf of Bread.

Facemeat standing next to Jesse.

Facemeat with The Old Builders.