1.8
Endermites are hostile mobs in Minecraft: Story Mode. They are small creatures that attack nearby players. 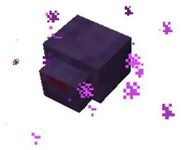 What an Endermite looks like in Minecraft: Story Mode. (It used to look like this in the original Minecraft, but it changed.)

Some Endermites seen below Ivor, Petra, and Lukas in the Portal Chamber.

Some Endermites on the ground