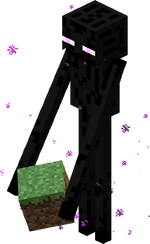 An Enderman in Minecraft

"Assembly Required",
"The Last Place You Look",
"A Block and a Hard Place"

For other uses, see Enderman (Disambiguation).
"I found that when you give people what they want, they turn on you. They become resentful... It's why I prefer Endermen. They always do what you expect, almost to a fault."
—Soren the Architect. src

Endermen are neutral mobs in Minecraft: Story Mode. Most of them are commonly found in The End, though they can naturally spawn in the Overworld in dark areas. They can also spawn in The Nether, though much less frequently.

Endermen have the ability to pick up and place blocks. Some endermen, who have been trained by Soren, can even build simple structures. They will teleport on their own will or if they are targeted by a thrown snowball, potion, or shot arrow.

An enderman in the End.

Some endermen looking through the window at Soren's Laboratory.

A hostile enderman.
Add a photo to this gallery
Retrieved from "https://minecraftstorymode.fandom.com/wiki/Enderman?oldid=182222"
Community content is available under CC-BY-SA unless otherwise noted.