Convention, Location
EnderCon is both an annual event and a city in Minecraft: Story Mode. It first appears in "The Order of the Stone".

EnderCon has several features and attractions:

EnderCon looks like a small town with houses made of stone. The attractions are also found there when the EnderCon Event is running. There is a dome which is made mostly of glass and stone, possibly the Town Hall. Inside there is an area where Gabriel answers questions to the people there. A basement is also found from a door left of the dome, leading to Ivor's lair. It has a library with potions, and behind a bunch of bookshelves was the incomplete structure of the Wither Storm​.

Jesse and Petra looking towards EnderCon from the bridge.

A donkey in EnderCon in a stand.

Two Announcers (Owen and Lydia) at EnderCon about to cheer for Gabriel.

Gabriel the Warrior and Reuben at EnderCon. 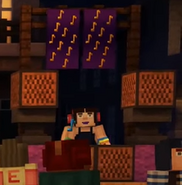 A view of the DJ booth.

An Iron Golem in the basement of the EnderCon building.