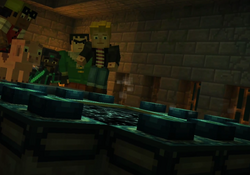 Jesse's Gang at an End Portal

Portal to go to The End

For other Portals, see Portals.

End Portals are structures that can teleport the player to The End and back to the Overworld.

The end portal is made of 12 end portal blocks. They can randomly generate with a few eyes of ender on them.

It is not known if an end portal is construct-able in Minecraft: Story Mode. In Minecraft, some underground strongholds contain pre-generated end portals which can be activated by inserting ender eyes onto each of the portal blocks.

The End Portal teleports the player to the End. However, when they go to the End, there is no return portal behind them. They have to kill the Ender Dragon in order to spawn the portal leading back to the Overworld.

Jesse's Gang next to the End Portal.

Right after Jesse enters the portal.
Add a photo to this gallery
Retrieved from "https://minecraftstorymode.fandom.com/wiki/End_Portal?oldid=177517"
Community content is available under CC-BY-SA unless otherwise noted.