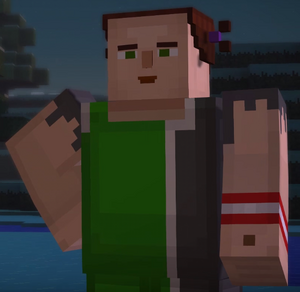 "Oh, I don't think so!"
—Emily to Jesse when he/she is in the Respawn Zone. src

Emily, also known as "Em," is a character in Minecraft: Story Mode who appears in "A Journey's End?". She is voiced by Audrey Wasilewski.

Emily is a heavily built person who is a competitor in The Games and therefore wears the official outfit of the green team, whom she is a member of. The outfit consists of a lime green and gray colored shirt and pants. Emily's outfit appears to have ripped sleeves which reveals a red and white wristband on her left arm. She also has black shoes and a purple hair tie on her left side. She has short, light brown hair with pigtails.

Emily is shown to be unreliable, displayed by her multiple betrayals on both sides, (first Jesse, then The Old Builders), even willing to hurt her own teammate, Nell, at one point. However, this may be attributed to her desperation to leave the Games, doing whatever she believes will help her escape. Throughout the course of Episode 8, she alternates between being friendly and hostile towards Jesse and his/her friends, depending on which side she is currently on.

"You just can't take a hint, can you?"
—Emily to Jesse before kicking Nell off. src

"Get dunked on, you slacker!"
—Emily to Nell. src

"Look, it was a nice speech... but strength doesn't come from speeches. "
—Emily to Jesse after his/her speech.  src

"Thought I try giving the friends thing a shot/Figured I tried believe in myself for once and take a chance."
—Emily to Jesse, giving him/her a stone sword. src

"Well everyone could always use a little dose of luck, right?"
—Emily to Jesse in the Dormitory.  src

"It's funny... Right when you're about to get what you want, you start to worry whether it's really what you want..."
—Emily to Jesse. src

"Right behind you, fearless leader."
—Em to Jesse. src

"Next round, if I don't get you, one of the Gladators will."
—Em to Jesse. src 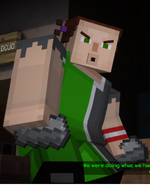 Emily in the Competitors' Village.

Em trying to make a deal with Jesse.

Em using water to get Jesse and Nell from not winning.

Emily at the end of the Lava Race. (Determinant)

Emily walking to Jesse in The Walls.

Emily in the Portal Hallway.