Killed by the Witherstorm. (Determinant)

Engineer of The Order of the Stone

"The Order of the Stone"(Flashback)

"Necessity is the originator of invention, and that monster is my necessity for inventing, of which I am the originator!"
—Ellegaard the Redstone Engineer to Jesse and Olivia. (Determinant) src

Ellegaard the Redstone Engineer, more commonly referred to as Ellegaard or Ellie, is a Redstonist, a member of The Order of the Stone and a major character in the first season of Minecraft: Story Mode. She is voiced by Erin Grey Van Oosbree "Grey DeLisle-Grey Griffin".

Ellegaard has brown hair that curls at the sides of her head and tan skin. Her armour has a brown/black tinge to it and is gold around the neckband and torso. She has brown pants and dark red boots. When she is not wearing armour, she wears a white shirt under a copper-coloured blazer with dark reddish-brown pants and black shoes. She previously wore a red helmet as well as steampunk goggles.

Through the extensive grats of her arrogance and circle-chain, she can automatically belittle people into doubting themselves, Olivia being a prime example of her mild manipulation; intentionally or not seesaw. Though she often has arguments and prejudice perspectives with her rival, Magnus, like all her antagonists, her conflict priorities swap to and fro on her list of precedence when the situation turns urgent. Notwithstanding all her un-self-aware flaws, her personality doesn't only consist of negatives: Her smarts and cleverness with redstone mechanics are clearly what steered her in the Order of the Stone as an engineer which she knows well. She keeps a habit of openly notifying when she respects somebody amidst her guarded formality. Despite the path of experience, once she gets a negative impression of someone, it can be hard to change her mind with her stubbornness unless a great deal has been done. (E.g: Magnus' death and Jesse momentarily taking down the Witherstorm in episode three) Her honesty, though commonly over-truthful, can be openly noticed in the reflexive pieces of her temper.

Ellegaard doesn't exactly carry much respect for Jesse when the two first meet, however, as the game advances, she notices their expertise as a leader figure and even volunteers Jesse to wear her armour when setting of the Formidi-Bomb. If Jesse does accept her armour, Ellegaard is struck to the ground by the Wither Storm and is lamented with Jesse alongside the rest.

Olivia exceedingly respects Ellegaard as a Redstone Engineer and as an inspirational figure. She thinks highly of Ellegaard's judgment about her. Ellegaard, on the other hand, often acts cold and prickly towards Olivia past the fact that she does offer her a position as her assistant.

Though Axel and Ellegaard don't interact much during the story, when Ellegaard and Magnus quarrel with one another, Axel habitually takes Magnus' side, which considerably provokes Ellegaard.

Ellegaard acknowledges that Reuben is a rather adorable animal. She appears to be disheartened at his death. Iif she is alive when the Witherstorm is ultimately eliminated, that is.

Magnus and Ellegaard are frequently portrayed at odds, continuously bickering and complaining, much to the annoyance of the remainder of the group. However, when one of them is eventually ambushed by the Witherstorm, their opinions toward the other are considerably softened.

Gabriel and Ellegaard, as members of the Order of the Stone, appear to be good friends. If Gabriel was saved in episode one, and the player investigated the proximity of Redstonia particularly for Ellegaard, the two will hug. If Ellegaard is still alive by the end of episode three, she'll recommend she lingering back at the cave to keep supervision of Gabriel.

Soren and Ellegaard definitely appear to have a positive relationship and are good allies as members of the Order of the Stone. It can easily be seen when Ellegaard is hit by the Wither Storm, Soren promptly hurries to her side and tries to reassure her by encouraging that she'll be just fine and berates her for saying otherwise, though she's speaking the truth. He's considerably disheartened by her passing. That is, past the fact that he's the one to angrily change the subject when her departure is inevitably drawn to topic later, though that may've just been anger, following denial.

Ellegaard and Ivor are both members of the original Order of the Stone, however, when Ivor abandons the Order, the two don't seem to have a relationship that has them to keep in touch. When Ivor unleashes the Wither Storm, Ellegaard is shaken and terrified at his behaviour and strives to stop the abnormality that he has conceived.

If Ellegaard lives, then she will be particularly antagonistic towards Ivor and consciously refuses to overlook what he's done to half the world.

The list below shows the victims Ellegaard has killed:

If Jesse chooses to take Ellegaard's armor when she and Magnus offer theirs, she gets killed when the Wither Storm hits her into a tree, due to her not having armor to protect herself.

"Wait...waitwaitwait, how do you know what a Command Block is? Not to seem belittling, but we're talking mega-levelled, ultra-genius stuff here."
—Ellegaard to Jesse. src

"Oh, so you're sticking up for Magnus. That's very, sweet."
—Ellegaard to Axel. src

"You really weren't kidding."
—Ellegaard to Jesse's Gang and Magnus if Jesse chooses to find Magnus with Axel. src

"...and I, Ellegaard, will make a Command Block, today!"
—Ellegaard to Jesse and Olivia. src 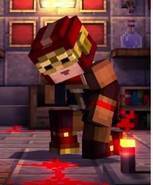 Ellegaard doing her experiment, while Jesse, Reuben and Olivia watch. 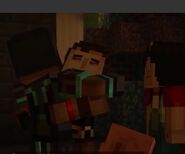 Ellegaard and Gabriel hugging each other. 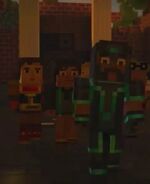 Ellegaard talking to Olivia in the Old Order's Temple. 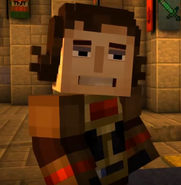 Ellegaard angry at Jesse and Magnus.

Ellegaard with the Order of the Stone.

Ellegaard about to die. (determinant)

Ellegaard with Soren riding away from the Wither Storm. (Determinant)