Fancy Potion (when you mouse over it)

"I saw it first!"
—Jesse taking the Elixir before Axel. (Determinant) src

The Elixir is a potion briefly seen in Minecraft Story Mode that was originally created by Ivor to stop the Wither Storm. 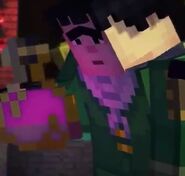 Jesse about to throw the potion at The Wither Storm.
Add a photo to this gallery
Retrieved from "https://minecraftstorymode.fandom.com/wiki/Elixir?oldid=170298"
Community content is available under CC-BY-SA unless otherwise noted.