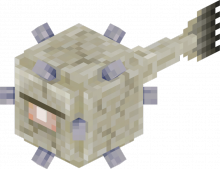 An Elder Guardian in Minecraft.

Elder Guardians are aquatic Hostile Mobs, that appear in Minecraft: Story Mode Season 2. They are larger counterparts of the guardians.

Like their smaller counterparts, elder guardians are capable of firing a laser from their eye, it acts the same as the guardian's laser, being deadly to both squids and humans.