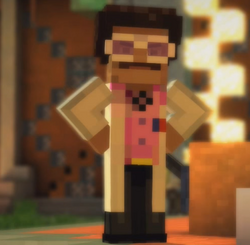 "My cows, my poor cows!"
—Disco Mickey about his Bovine Lava Disco being destroyed. (Determinant) src

Disco Mickey is a minor character in Minecraft: Story Mode and a resident of Redstonia. He appeared as a determinant character in "Assembly Required" who invented the Bovine Lava Disco. He is voiced by Jason "jtop" Topolski.

Disco Mickey appears to have a black afro, and wears a pink shirt with a white jacket on top and black pants. He also wears white glasses.

Disco Mickey seems to be a confident Redstonist who likes to dance. He also has a deep connection with the Cows in his Lava Disco. If you steal the Redstone Repeater from his machine, the cows from invention will get burned, and he will be very upset about the death of his cows. He also appears to hold a grudge against the Schoolboy.

Disco Mickey can be seen in the crowd of the celebrate of the Wither Storm's death by Jesse. He is standing with the Old Farmer Man, Nohr, and the Death Bowl Announcer. 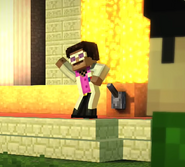