Killed by spiders or axed by the White Pumpkin. (Determinant)

"A Portal to Mystery"
​Were you looking for the item, a Diamond Minecart?

"What if we're all in danger?"
—TheDiamondMinecart to everyone. src

TheDiamondMinecart, also referred to as DanTDM and Dan, is a character that appeared in "A Portal to Mystery" in Minecraft: Story Mode. He is voiced by Daniel Middleton.

Dan appears to have his Minecraft skin, which is a black shirt and blue and gold lowers. He also wears blue goggles. His hair continues to change color from brown to blue, blond, gray, and purple throughout the game.

Dan is portrayed to be a helpful, truthful yet nervous person, similar to Stampy Cat. He can also be assumed to be a good adventurer as he found the other Enchanted Flint and Steel.

"You said there was news? Is it good? Good news?"
—Dan asking CaptainSparklez for news. src

"And there's no such thing as 'white pumpkins'!"
—DanTDM upon seeing the White Pumpkin. src

"It was me... *I* killed Sparklez! "
—Dan admitting the murder to Stampy Cat or LDShadowLady. (Determinant) src

"I don't like accusing people..."
—Dan during the interrogation. (Determinant) src

"I swear, I had no idea. There was this button (I'm not good with buttons) I had to push it – I had no idea what it would do! Now I feel awful..."
—DanTDM explaining the murder situation. (Determinant) src

"What, what on Earth?! "
—DanTDM about Jesse smashing the painting into the library. (Determinant) src

"Well, I for one do not feel safe being surrounded by possible killers so if you'll excuse me, I'm going to barricade myself in the library for my own safety. "
—Dan if Jesse chooses to not accuse anyone. (Determinant) src 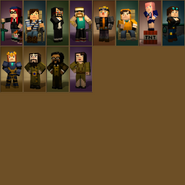 DanTDM's portrait with others and Calvin's and Ivy's.

DanTDM proclaiming there are no such thing as white pumpkins.

DanTDM with some YouTubers and Ivor.

DanTDM fighting some Spiders with Jesse and LDShadowLady.

DanTDM backing up when LDShadowLady is being killed by Spiders (determinant).

DanTDM being attack by spiders (determinant).

Dan about to be murdered by The White Pumpkin (determinant).

DanTDM with, Petra, Ivor, Jesse, and Stacy Plays at the Mansion.

DanTDM after Lukas is taken away.