A Creeper in Minecraft

The Order of the Stone
Assembly Required
The Last Place You Look
A Block and a Hard Place
Order Up!
A Portal to Mystery
Access Denied
Hero in Residence
Below the Bedrock
Above and Beyond

For other uses, see Creeper (Disambiguation).

Creepers are hostile mobs found in Minecraft: Story Mode. They have a distinct green color, and have a habit of sneaking silently up on characters and exploding, emitting a sudden hiss before they do so.

Creepers and Zombies on the abandoned bridge. 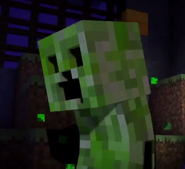 A Creeper spawned by Aiden.

Two Creepers on the abandoned bridge.

Three Creepers at the edge of the abandoned bridge.

Jesse and Gabriel fighting a pair of Creepers. 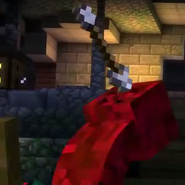 A creeper shot by an arrow in "Order Up".