"See, isn't it better when you make it yourself?"
—Petra. src 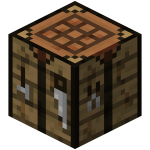 A Crafting Table in Minecraft

"The Last Place You Look"