The Competitors, along with Petra, Lukas, Ivor, and Harper cheering Jesse.

"We used to have competitors from all over travel here to play the games... At least until the others ruined it."
—Harper to Jesse and Petra/Ivor. src

Competitors are players of The Games created by The Old Builders.

Competitors are separated into several teams. They use their skills to challenge other teams and gladiators to try winning the games. Once a competitor is eliminated ("died" and respawned) from a game, they cannot join the next game. If all members in a team are eliminated, the whole team become miners in the Quartz mine in the Nether. Miners wait for another chance to become competitors again to re-challenge for their freedom.

When competitors are off of game matches, they stay in Competitors' Village and prepare for the coming matches.

As shown in Episode 8, competitors are forced to play the games to earn their freedom. However, Since the Old Builders manipulate the games and make them unbeatable every time, all competitors suffer from endless trying.

After Hadrian and Mevia's downfall, under Otto's leadership, competitors are no longer forced to play. Some competitors return to their homeland, while others stay for fun in the games without desperation.

Jesse's Gang and two other Competitors in Episode 8 preview image.

Jesse fighting one of the Yellow Team members (Determinant).

Jesse, Ivor, and several Competitors in the Lava Race. (Determinant)

A member of the Blue Team in The Games.

Three members of the Purple Team.

Three members of the Yellow Team at the Lava Race starting line.

One of the Competitors of the Yellow Team.

Many competitors listening to Jesse's speech.

Emily, a cometitor at The Games. 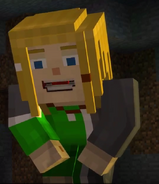 Nell, a competitor at The Games. 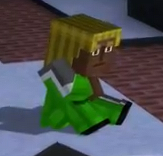 A Green Team member in the Competitors' Village.