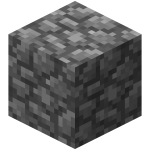 A block of Cobblestone in Minecraft

A Cobblestone is a block in Minecraft: Story Mode. They can be used as building blocks and crafting materials.

Retrieved from "https://minecraftstorymode.fandom.com/wiki/Cobblestone?oldid=173330"
Community content is available under CC-BY-SA unless otherwise noted.