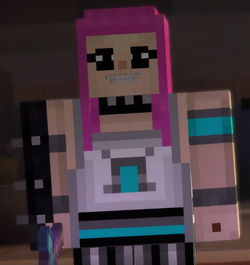 "Get out of here, before I see if I can attach this sign to your head."
—Clutch to Jesse in the Competitors' Village. src

Clutch is a character in Minecraft: Story Mode and gladiator in The Games. She appears in "A Journey's End?". She is voiced by Julianne Buescher.

Clutch has pink hair and a lot of what appears to be thick eyeshadow below her eyes. Like the others, she wears gladiator armor.

Clutch is ready to do her job and slightly enjoys threatening the Competitors. However, she will defend them from unjust harm; as seen when Jesse determinately attempts to attack Nell after the Spleef round, Clutch stops Jesse to protect Nell. Clutch enjoys fighting and mocks her opponents, and she backs up the other gladiators in battle. She isn't much on deep thinking, as she asks Slab the Immovable on what to do if Jesse attempts to recruit the gladiators to his/her side.

"It's so nice when new contestants are in the village. It's lovely having fresh meat for us gladiators to destroy. "
—Clutch to Jesse in the Competitor's Village.  src

"It's going 'not the best.' And you're not going anywhere. "
—Clutch to Hadrian and Mevia.  src

Clutch in the Respawn Zone.