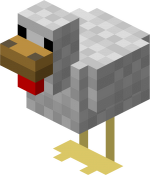 A Chicken in Minecraft

Chickens in the Chicken Machine

Benedict (a.k.a. the Eversource), is one of the only named chickens in Minecraft: Story Mode

Jesse jumping over a flock of chickens.

Chickens escaping from the Chicken Machine at EnderCon.

Jesse standing next to a Chicken in the Overworld.

Ivor and Jesse with the Eversource.