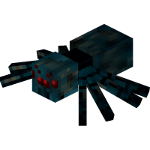 A Cave Spider in Minecraft

"The Last Place You Look",
"Order Up!",
"Jailhouse Block"

"Why did it have to be Cave Spiders?"
—Petra when escaping the temple. src

A Cave Spider being thrown by an Iron Golem.

Jesse escaping from the temple.