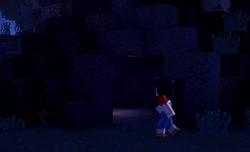 Caves are found all over the Overworld.

Caves are natural tunnels mostly made of stone, gravel, and dirt. There are ores in underground caves.

Jesse's gang and the Order in a cave in Episode 4.

Jesse and Petra in a cave in Episode 1.

Soren and Jesse outside the cave in Episode 4.

Jesse with Lukas and some horses inside the cave. Soren can just be seen standing outside the cave entrance.

Jesse, Reuben, Soren, Magnus and Lukas first entering the cave in Episode 4, after escaping the Witherstorm.

Jesse looking at the Beacontown mines.

Jesse preparing to jump from a ledge in a cave.

Jesse running from spiders in a cave tunnel.

Petra fighting spiders in a cave.

Lluna the Llama in the cave.

The prismarine gauntlet in a large cave area.

Jesse's Gang crossing over a lava stream in the cave tunnels under Beacontown.

Bats flying in the cave.
Add a photo to this gallery
Retrieved from "https://minecraftstorymode.fandom.com/wiki/Cave?oldid=152569"
Community content is available under CC-BY-SA unless otherwise noted.