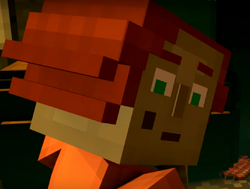 Carmine is a minor character in Minecraft: Story Mode, Season 2 and is a "Guest" at the Sunshine Institute. He first appeared in "Jailhouse Block" and is voiced by Shane Snider.

Not much is known of Carmine's personality, only that he loves eating zombies' rotten flesh.

"I love it! High in protein! High in flavor! Maybe just a little bit poisonous sometimes, but you only live once!"
—Carmine to Jesse about zombies' rotten flesh (determinant). src

Retrieved from "https://minecraftstorymode.fandom.com/wiki/Carmine?oldid=201313"
Community content is available under CC-BY-SA unless otherwise noted.