Minecraft Story Mode Wiki
Register
Don't have an account?
Sign In
Advertisement
in: Humans, Gladiators, The Games,
and 9 more 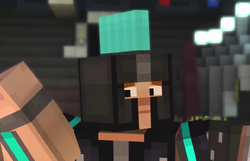 Capital T at The Walls

Capital T ​is a Gladiator and minor character in Minecraft: Story Mode. ​He first appeared in "​A Journey's End?".

Capital T wears a set of armor similar to other gladiators, as well as a black corinthian helmet with a cyan mohawk. Also, the face hole on his helmet looks like a "T" shape. He has black eyes and light brown hair, assuming his eyebrows and hair color match.

He appears to be a big fan of Tim, but his personality is not explored any further than that.

Capital T at The Walls.

Capital T talking to Jesse in the Competitors' Village. (determinant)

Capital T with the other gladiators.