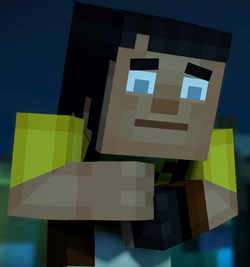 Cam is very scared of strangers. When Cam first sees Jesse, Petra, Radar, determinately Jack, and Nurm/Lluna, she is scared and runs to Binta for help. In Fred's Keep, she is still scared of Jesse. Later near the end of "Below the Bedrock", she is seen fighting along side Kent, Binta, and a few other unnamed townspeople, showing she has grown braver.