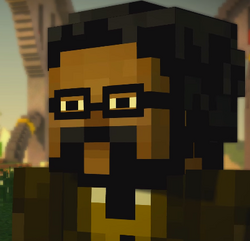 Calvin is a minor character in Minecraft: Story Mode and a resident of Redstonia. He appeared as a determinant character in "Assembly Required" as one of Ellegaard's personal assistants. He is voiced by Michael Gambino.

Calvin appears to be a dark-skinned man with a thick moustache. He wears a black coat over a light brown shirt and has black glasses.

Calvin seems to be a very serious person who takes his job as Ellegaard's assistant the upmost importance. He doesn't seem to be very friendly or talkative.

Calvin taking the repeater away.

Calvin and the crowds cheering at Jesse's gang. 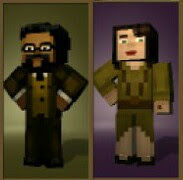 Hidden potraits in the game files of Calvin alongside Ivy.