A Cake in Minecraft

"Say what you like about Witches, they sure know how to make a cake."
—Gabriel to Olivia. (Determinant) src

A Cake is an edible block that is found in Minecraft: Story Mode. 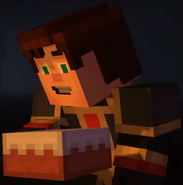 Jesse gets a cake from the Old Builder Temple.

The hungry Sky City townsperson jumping off with a cake. (Determinant)

Stacy and Stampy Cat with cake and pumpkin pie. (Determinant)
Community content is available under CC-BY-SA unless otherwise noted.
Advertisement