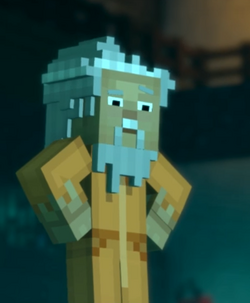 "As Jesse walked up to Brick, Jesse noticed that he was narrating all of Jesse's actions."
—Brick meeting Jesse. (Determinant) src

Brick is a minor character in Minecraft: Story Mode Season 2, a "guest" of the Sunshine Institute, and first appeared in "Jailhouse Block" and is voiced by Fred Tatasciore.

Not much is known of Brick's personality, other than that he likes to narrate his conversations. He also appears to be stubborn and persistent, as shown when he never gave up his habit of narrating even after Romeo imprisoned him. He doesn't like others stealing his schtick.

"Brick remembered the day The Admin, annoyed with Brick's constant need to narrate, sent him to The Sunshine Institute to break Brick of the habit. Brick was promised release if he stopped. But nothing will ever break Brick's spirit. He will narrate... forever."
—Brick narrating to Jesse. (Determinant) src 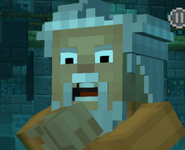 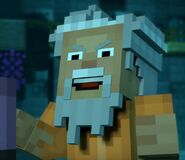