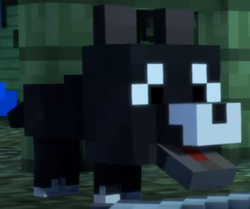 Blocco is a puppy and minor character in Minecraft: Story Mode Season Two. He first appeared in "Below the Bedrock", and determinately gives a Fred fact by indirectly causing Willy to accidentally reveal the name of Fred's former pet chicken: Waffles.

Blocco has black fur, nose, eyes, tail, and ears, and has a white snout and paws. He also has a red tongue.

Blocco is shown to be playful and loves to play fetch with humans, like Jesse.

Blocco after fetching a bone. 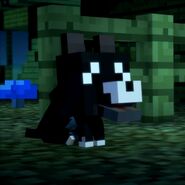